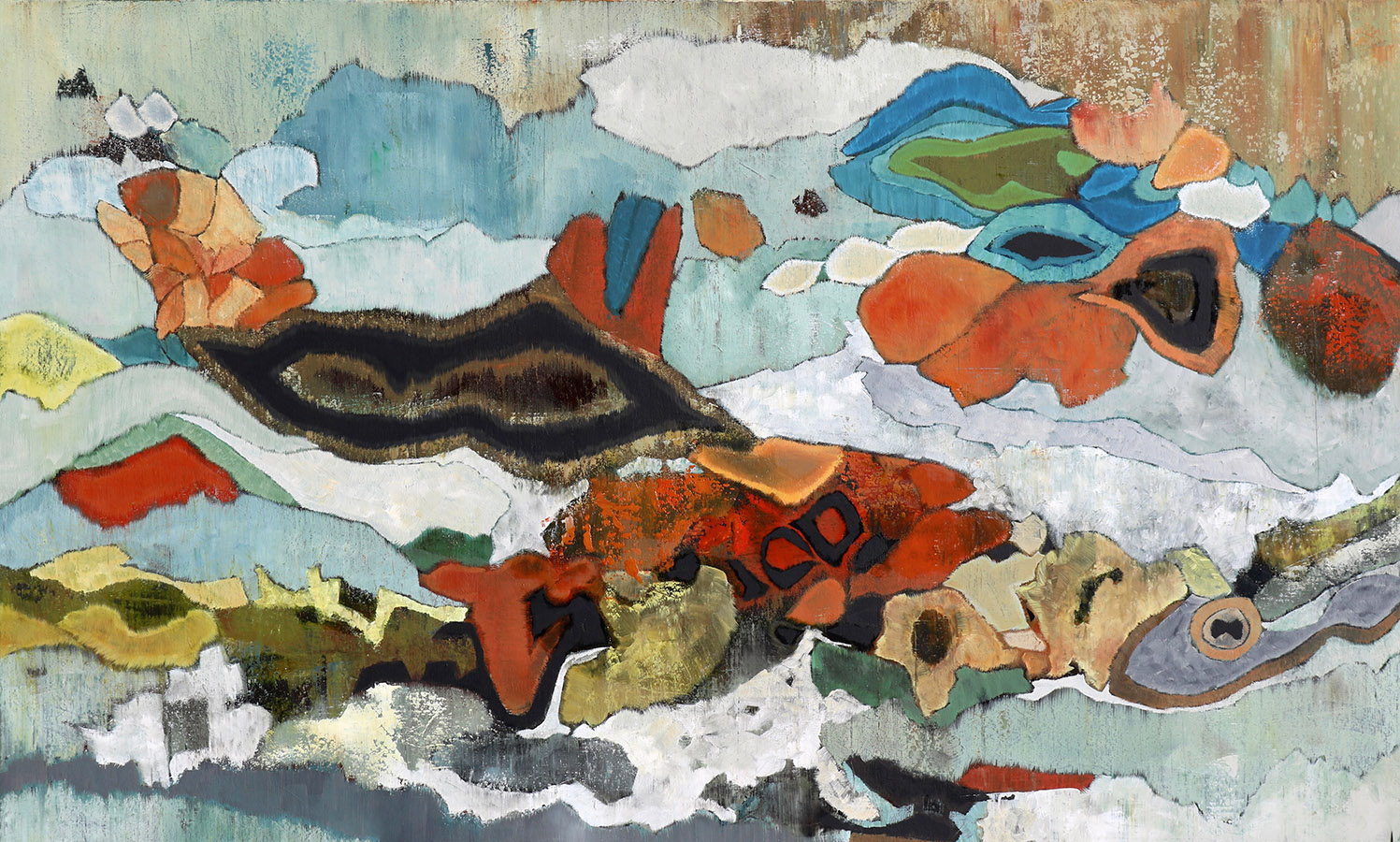 As a cartographer, Chase Langford knows the rules of spatial science. As an artist, he knows how to exquisitely break them. From southern California to the Pacific Northwest, Langford?s latest body of work delivers an idiosyncratic survey of places re-imagined. Abstract forms and rich textures merge in otherworldly portrayals of real geographic forms, rendering landscapes at once familiar and elusive.? Reminiscent of sedimentary cross-sections, Langford?s canvases are confidently tactile. Generous paint application paired?with a bold, earthy palette evoke the rich strata of the Earth?s crust while speaking to the incipient creative act of the artist. In Calcadia, Langford brings focus to the physical landscape of the American West Coast just as so much of it ismchanging. In doing so, he asks us to see that landscape not only for the wonder it is, but for what it has been and what it might be ? years, centuries, eons from now.

Chase Langford?s artistic practice emerges from a lifelong fascination with the natural world. By his teens, Langford had a personal collection of over 1000 atlases and maps. His cartographic impulse quickly carried over to his studies in geography at UC Santa Barbara, and later to creating maps for faculty at UCLA. In the 1980s, with a perspective deeply informed by the rich visual patterns of the organic world, Langford began exploring ways in which he could integrate cartography and fine art. His work is displayed in residential, public and corporate collections worldwide, including the Long Beach Museum of Art, the Four Seasons in Hong Kong, USC?s Keck School of Medicine, Monique Lhuillier Inc, UBS and Nordstrom stores nationwide. He currently works from his studio in Los Angeles, California.

Before air balloons and Kitty Hawk and Yuri Gagarin?s 1961 orbital flight, our views of Earth from above were limited?in scope. For many of us the profound experience of flying, of observing fields, rivers and cities from the stratosphere,?is now quotidian. In this exhibition, artists David Burdeny and Chase Langford challenge that view. Their unique?geographies ask us not only to consider the lands we inhabit, but also our own internal landscapes. With different?approaches and different mediums, each artist seeks to create a sense of wonder by focusing primarily on spatial?patterns seen through the human eye and projected by human consciousness.

This spring, we are thrilled to introduce photographer David Burdeny. Burdeny?s exquisite work has at its heart a?quest for ?thresholds and liminality — places that seem somehow a bridge between the concrete and the ephemeral,?elevated above time, hallowed,? as he says. His search for the sublime is evident in both his lush interiors and stark,?elegant landscapes. Utilizing unusually long exposures, Burdeny enables the viewer to see that which the eye alone?cannot. His work encourages a sense of mystery, a desire to look deeper, to slow down.?

Chase Langford?s paintings evince a lifelong fascination with the endlessly varied forms of the natural world. In?his youth, Langford amassed an impressive collection of atlases and maps; a passion which led him to studies in?geography at UC Santa Barbara, and later to work as a cartographer at UCLA. Langford ultimately found expression?for his interests by painting, through which he could explore terrains both real and imagined. His layers of rich?pigments recall sedimentary cross-sections as much as they do aerial views of rivers, valleys, and rock formations. 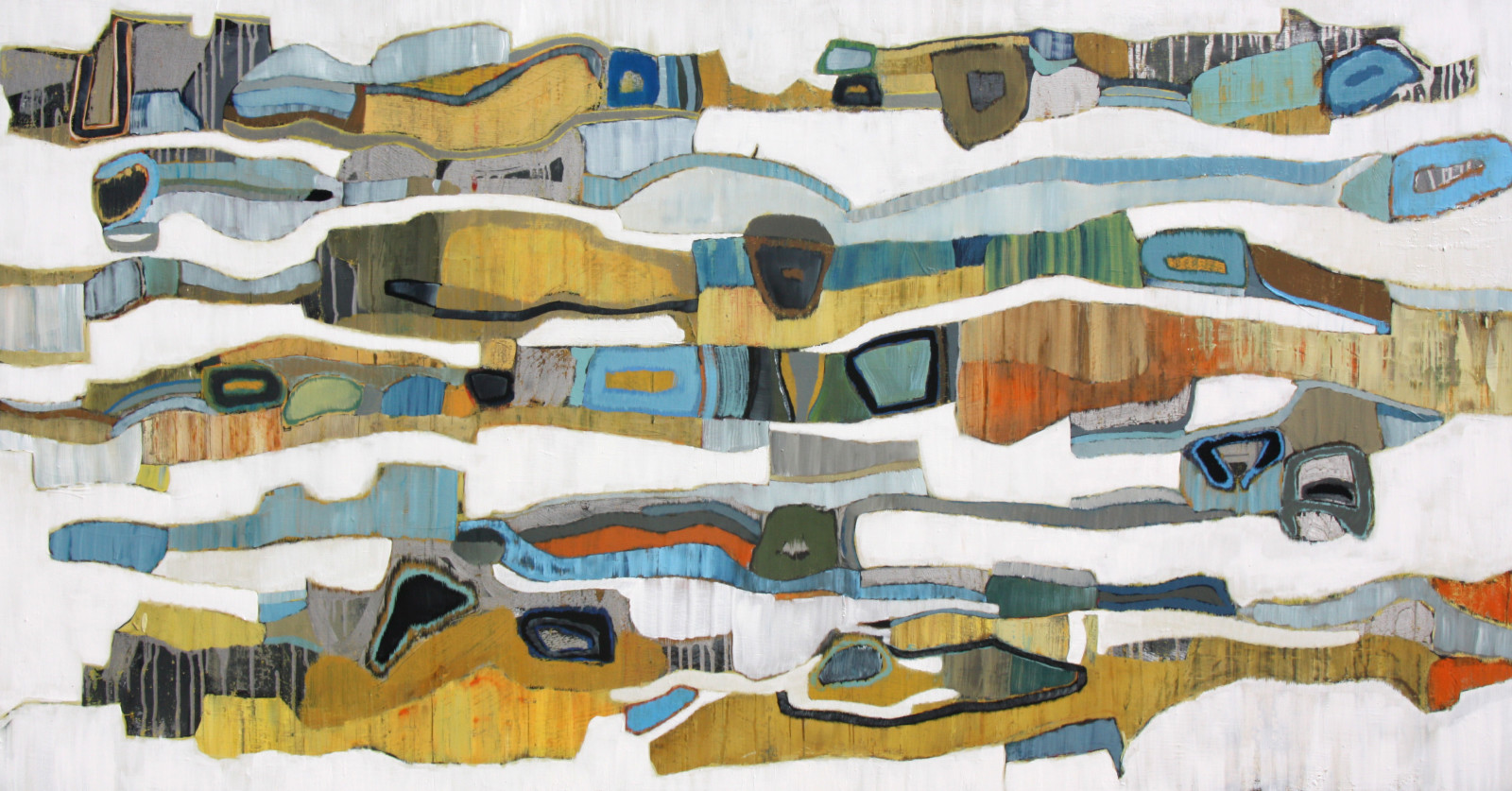 Chase Langford?s painting practice emerges from a lifelong fascination with the endlessly varied forms of the natural world. This fascination began during childhood, and grew rapidly; by his teens, Langford had gathered a personal collection of over 1000 atlases and maps. His cartographic impulse quickly carried over to his studies in geography at UC Santa Barbara, and later to a job creating maps for faculty at UCLA. In the 1980s, with a perspective deeply informed by the rich visual patterns of the organic world, Langford began exploring ways in which he could integrate cartography and fine art. Equipped with skills in both life drawing and ceramics, he began a painting career inspired by natural phenomena both intimate and vast.

His stacks of brightly contrasting pigment recall sedimentary cross-sections as much as they do aerial views of rivers, valleys, and rock formations. Langford begins his canvases with impulsive mark-making, a technique that forms and gentles to a refinement of aesthetic in abstract, layered shapes. Graphic and linear, compositions nonetheless undulate across the canvas with a water-like flow; concentric circles of color are dense and distinct deposits, unmistakably reminiscent of rock strata formed over thousands of years.

Langford?s work is prominently displayed in residential and corporate collections worldwide, including the Four Seasons in Hong Kong, the Park Hyatt Aviara in California, and Nordstrom stores nationwide. He currently works from his studio in Los Angeles, California.

Land Marks will be Langford’s first solo exhibition with the Foster/White Gallery. ??http://fosterwhite.com/

We are pleased to announce the opening of ?Geo+Morphic,? Chase Langford?s first solo exhibition at Susan Eley Fine Art. ?Geo+Morphic? opens with an artist?s reception on November 6, 2014, 6-8 pm, and will remain on view through December.

Approximately 20 paintings will be on display, drawn from the artist?s Morphic and Essex series. Influenced since boyhood by a love of mapmaking, which eventually led to his study of and work in cartography at UCLA, Langford continues to be inspired by the spatial rhythms of geography. While a cartographer?s intent is to apply precision and science to outline our spatial world, its coastlines, rivers and roads, Langford?s paintings depart from the rules of cartography, as he applies a free flowing approach. The looseness creates a marvelous abstraction from painting to painting.

Langford?s Morphic paintings, with their biomorphic and organic forms in constant ebb and flow, elicit great sensual pleasure. While based in geography, Langford creates magical, mystical landscapes, with brightly colored paths, waterways, rivers, plateaus and rocks, seemingly untouched by humankind. Or changing our lens, we could be peering at a cross section of a fantastical rock, cut with bright colored striations, shiny mica formations, and layers of faults and folds that reveal both rough hewn textures and smooth, saturated surfaces.

In addition to the natural world, Langford is influenced by architecture, design and fashion, reflected in the work of the Essex series, redolent with the aesthetic of mid 20th- century design, with it tighter geometry and hues of black, white, reds and blues. Textile patterns and ethnic woven creations also come to mind, as the aesthetic is vaguely reminiscent of ancient or Aztec cultures.

Langford is a wellspring of inspiration and positive energy, creating exultant paintings. He often works on several canvases at one time, as he waits for the layers of oil paint to dry. From his Los Angeles studio atop the Santa Monica Mountains along Mulholland Drive, he draws inspiration from the rugged landscape, the deep chaparral filled canyons and sweeping panoramas.

Langford first showed at SEFA in the group exhibition ?Making Their Mark,? curated by SEFA artist Amber George (2011). Since then, SEFA has presented his paintings at Aqua Art Miami (2012), CONTEXT Art Miami (2013) and Art Silicon Valley San Francisco (2014). In addition to the Morphic and Essex series, SEFA has displayed work from the Chroma series, characterized by repeating feathery brush strokes on paper, applied in a mosaic pattern; and the Coldwater series, which show tangled, lyrical lines that at first glance feel aquatic, but have been inspired by the movements and rhythms of Coldwater Canyon near his home.

Concurrent with ?Geo+Morphic,? Langford is featured in a solo exhibition organized and held at Gensler architects, Washington DC, opening on October 29, 2014 and remaining on view for four months.