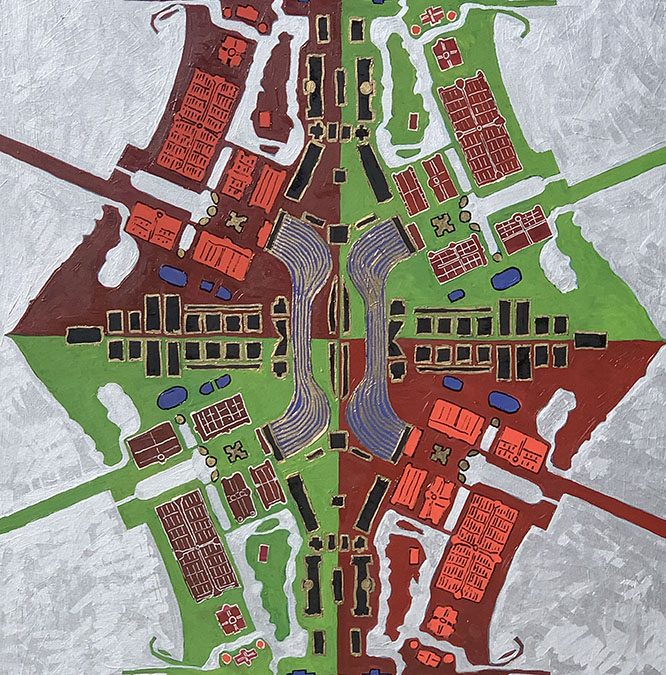 The 1893 World’s Columbian Exposition in Chicago was a marvel beyond all that had preceded it.  Even today scholars and fans revel in this spectacular fair.  Renowned Washington architect, Kenneth P. Baker of Gensler, is one its biggest enthusiasts. In a homage to the fair, Baker commissioned Langford to paint a map painting based on the fair’s design.

Wanting to do something more than just use the plans it was, Langford mirrored and flipped the plan resulting in four images that formed an impactful iconic design.  The painting is oil and metallic paints on wood panel, 40 x 30 inches titled, “Expo Icon 1893.”

This the first Chase Langford map painting created in many years, the last was a map painting of Manhattan for Mastro’s New York.  This new work was painted at both Langford’s Los Angeles and Palm Springs studios, traveling back and forth many times while it evolved.

Baker is considered a global expert on workplace design and planning, particularly for law firms. He has designed more than 20 million square feet of corporate headquarters and offices for law firms and financial institutions.  He is also well known as a fashion trendsetter and is listed on best dressed lists and featured in culture magazines, such as Beverly Hills Lifestyle Magazine.

From Wikipedia:  The World’s Columbian Exposition (shortened name for the World’s Fair: Columbian Exposition, also known as the Chicago World’s Fair) was a world’s fair held in Chicago in 1893 to celebrate the 400th anniversary of Christopher Columbus’ arrival in the New World. The centerpiece of the Fair, held in Jackson Park, was a large water pool. Chicago had won the right to host the fair over several other cities, including New York City, Washington, D.C., and St. Louis. The exposition was an influential social and cultural event and had a profound effect on architecture, sanitation, the arts, Chicago’s self-image, and American industrial optimism.

The layout of the Chicago Columbian Exposition was, in large part, designed by John Wellborn Root, Daniel Burnham, Frederick Law Olmsted and Charles B. Atwood.  It was the prototype of what Burnham and his colleagues thought a city should be. It was designed to follow Beaux-Arts principles of design, namely neoclassical architecture principles based on symmetry, balance, and splendor. 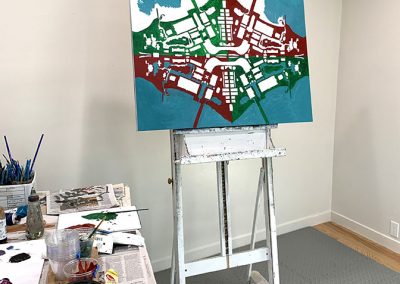 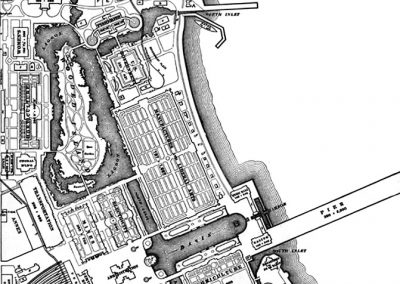 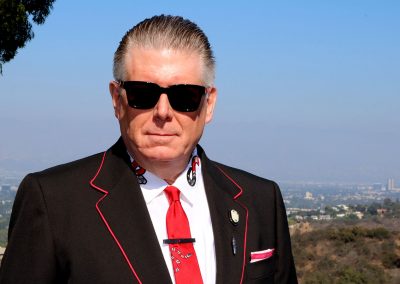